Home > Healthy Decisions >What to Eat…and Why
Pin It

What to Eat…and Why 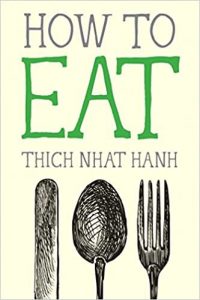 I was reading the book, “How to Eat”, by Thich Nhat Hanh (I do recommend it for anyone who needs to learn to enjoy what they eat instead of fearing it), and he asked two boys why they eat breakfast.  The first boy replied, “To get energy for the day.”  The other said, “The purpose of eating breakfast is to eat breakfast.”

Which would be your answer?

As a dietitian, I realized I would probably have said the same thing as the first boy.  My job as a dietitian is to explain why one needs to eat food (to nourish your body) and possibly suggest what might be some healthy alternatives.  Yet, unless you decide what it is YOU want to eat, by just following what I suggest could potentially remove the pleasure of eating.  It’s interesting how many overweight people say they don’t really enjoy the food they eat.  They’re trying to eat healthier foods even if they don’t enjoy them.  That may be the basis for being overweight.

It’s possible that the obesity problem we have in the United States is due to a lot of people following what is considered good advice but not their own personal desire.  When you eat what you didn’t enjoy, you’ll be in search of something else.  When eating a meal, how many of you save the “best for last” so that is what remains on your taste buds and in your mind?

Let’s say you really want a piece of chocolate.  Feeling that it wouldn’t be healthy for you, you decide to have carrot and celery sticks instead.  That definitely didn’t satisfy the chocolate craving, nor get your mind off of the chocolate.  So next you try an apple.  Maybe because it’s sweet, you figure that will do it.  It doesn’t, sweet or not, because your mind is still fixated on the chocolate.  Now you’ve eaten unnecessary calories, no matter how healthy the food items were.  And your mind is screaming even louder at you, “Hey, Dummy, it was chocolate I wanted.”

Going back to the little boy who realized that he eats breakfast to eat breakfast, you eat a piece of chocolate because you want a piece of chocolate.  According to Thich, the second boy’s response was the better answer because the “purpose of eating is to eat”.  The only decision you need to make is how much to eat.  That is going to take mindful eating on your part and a bit of decision-making.

Learning How to Make Healthy Decisions

First, take note of what you want.  Be specific.  You wanted chocolate.  Milk or dark chocolate?  A bar or a truffle?

Second, think about the consequences of eating the chocolate.  Will it ruin your appetite for dinner?  Do you want it now or as dessert?  Do you think your choice will sufficiently satisfy you?

Third, if you want the chocolate, is it extra calories for the day or will it take the place of something else?  “Calories in” versus “calories out” still counts.

Now, go enjoy what you eat but eat mindfully, focusing only on what you’re eating while you’re eating it.  Make every eating experience special.  Then concentrate on when you’ve satisfied your desire.  In other words, you don’t need to eat the whole thing.  It’s okay to split an Oreo® in half and leave the other half for later!