Home > Healthy Decisions >Should I Weigh Myself Every Day?
Pin It

Should I Weigh Myself Every Day? 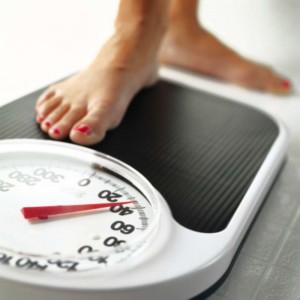 I used to tell my clients that weighing themselves every day was a waste of time.  Because you have to both decrease your calorie intake and increase your calorie expenditure by, on average, 3500 calories, there is no way a pound could be lost in a day’s time.  Even vigorous exercise for the average person (not an athlete) may burn up to 600-700 calories.  That’s not enough for a pound loss in a day.

After just coming home from a cruise, where I admit I ate more calories than usual (though I did try to exercise each day), I started weighing myself each day.  I just wanted to see if going back to my healthy way of eating was making a difference.  On Sunday night, I had smoked salmon for dinner along with an Asian salad mix from Costco that included some soy sauce in the dressing.  I weighed myself the next morning.  Whoa!  You’re telling me that what I ate the day before could have added 1 1/2 pounds?  No way!

That’s true – no way.  Well, at least no way that it was 1 1/2 pounds of fat.  I had even worked in the yard on Sunday, so I had expended some calories. I would have expected a loss not a gain.  What I had eaten during the day didn’t add up to 3500 calories more than I normally eat.

So, do I believe what the scale is telling me?  Yes and No!  Since my scale isn’t busted, I’m going to have to assume that the weight is correct.  My next question would be – What happened?  How could I have gained 1 1/2 pounds in one day?  The only answer that made sense to me was that I had eaten a lot of salt with the smoked salmon and Asian salad dressing and, therefore, I was retaining fluids.

The next question: What am I going to do with this information?

The Power of the Scale

Some studies are beginning to believe that weighing yourself every day could be beneficial.  There’s no better way to keep a weight-loss goal in your conscience mind than to have a constant reminder of your goal.  You could keep a note on your refrigerator to remind you to watch what you eat and that probably works for some personality types.  However, what better reminder of your goal than stepping on the scale in the morning and seeing what you have to work with for the day?  It’s a far stronger visual than the note on the refrigerator, a note that gets lost amongst the other refrigerator notes.

You’ll bet that I was extra careful the next several days after seeing a 1 1/2 pound increase, even if I could justify the gain.  It is amazing how powerful the scale can be.

Realize, though, that you can just as easily be swayed by the numbers on the dial going down.  While you’ll definitely be proud of yourself, you may also be tempted to eat more indulgences than usual, justifying them by what you saw on the scale in the morning.  (And, by the way, the best time to weigh yourself is in the morning after you’ve gone to the bathroom.  Weigh yourself without any clothes on so every time you weigh yourself, there is consistency of measuring.)

The Power of Your Personality Type

How you “spend” those lost calories is up to you.   Though, if you’re trying to lose weight, the idea isn’t to spend that loss with more calories.  You obviously now have some decision-making to do.

I have to be honest.  I worry a bit about you Perceivers, especially those Perceivers who are also Extraverts.  Your flexibility and social ability may more easily get you into situations that show you what to do with that weight loss.  (If you don’t know what your personality type is, take the free quiz to get a better idea of how to lose weight in a way that’s comfortable for your type.)

If you’re a Sensor, a person who is in-the-moment, the number on the scale is going to be very potent.  I can see weighing yourself as being a very positive experience and a good driving force to keep you set on your goal.  You combination Thinker-Judgers will also find weighing yourself each day a valuable experience, logging the results into a mental chart of your progress.