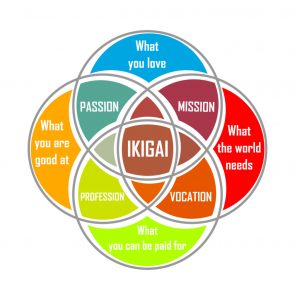 Seeing that it is the beginning of the year, I thought it was a good time for us all to think about what we want to see for ourselves in 2022.  No question, I’m sure, that everyone wants to get back to a more normal life.  The COVID virus won too many battles last year.  And, of course, if you’re like the 55% of Americans who make new year’s resolutions, you will have declared your intention of shedding those extra pounds you accrued while hibernating at home through the COVID pandemic.

What I’m going to share with you in this post isn’t some new diet plan or special food that’s guaranteed to burn the fat.  It’s not going to have you change anything but your mindset, using the Japanese concept called ikigai (EE-key-guy).

What has ikigai got to do with weight loss?

Let’s first talk about why people gain weight in the first place.  I will admit that food manufacturers don’t help us much.  Instead of making foods as healthy and unprocessed as possible, they add way too much sugar and fat to so many foods (which makes them very tasty and tempting).  No question that the reward area in our brain feels very rewarded when we eat sugar and fat.  So, not only do our taste buds get satisfied, but so does our brain.  Many years ago, Lay’s had a great campaign slogan for their potato chips: “Betcha can’t eat just one”.  Well, when a food manufacturer has found the bliss point of fat and salt, that’s very true … can’t stop at just one.  Then the weight starts piling on.

However, it isn’t just the foods we eat.  It’s also the negative emotions we carry, causing us to use food as we do a bandage on an open sore.  They both seem protective at the moment.  But there’s a major difference.  At least the bandage allows the wound to heal.  Food never allows the soul to heal even though it may feel like it does temporarily

Why do people become overweight?

You really have to ask yourself why people allow themselves to become overweight.  Weight gain doesn’t happen overnight.  Actually, maybe if it did happen overnight, we’d be able to deal with it better.  It would be such a shock waking up one morning, finding yourself 50 pounds heavier than the day before. We’d immediately want to find out why it happened and how to change it.  As we all know, weight gain happens gradually.  Just an extra 100 calories a day could add 10 extra pounds a year.

Viktor Frankl was a psychiatrist and survivor of the Holocaust.  He learned while being interned in various Nazi concentration camps what it meant to mentally and emotionally survive.  Finding purpose was his driving force to stay alive.  After the war, he returned to working with people who had severe clinical mental issues.  He helped them by getting them to listen to things that were often hard to hear and, more importantly, “find a reason to live”.  The latter concept was the basis for what he called “logotherapy”.

He was working with people who were deeply depressed and suicidal.  Is that so different from people who are overweight and obese?  You’d have to be living under a rock not to know that those extra pounds are potentially setting you up for heart disease, diabetes, cancer, and/or a host of other conditions, which could lead to an untimely death.  Are you masking your true feelings under a mound of chocolate or French fries and ignoring the possible outcome?

So, what I implore you to do is find your purpose in life.  When someone finds that which they’re passionate about, they get into what Mihaly Csikszentmihalyi calls “flow”.  Flow is pleasurable, a delightful creative process where you’re so immersed in what you’re doing that you find happiness.  I’m sure that overweight and obese people will tell their friends that they’re happy.  Look deeper.  If you were happy, would you spend as much time in the company of food, sacrificing the time you have for fulfilling your purpose in life or your ikigai?

Shoma Morita was a contemporary of Sigmund Freud and founder of “Morita Therapy”, which is a branch of clinical psychology that was influenced by Zen Buddhism.  He believed that we don’t create our feelings.  They just happen to us.  However, he emphasized that feelings do not cause behavior.  I’m not sure I totally agree with that, since many people try to mask their feelings with food or alcohol.  But I’m willing to consider his three steps to taking constructive action against those feelings, and, in turn, losing weight and finding the happiness each individual justly deserves:

As you find what that purpose is, share it here with others.  Declaring your intentions gets you on your way.  When it’s out there in the world, good karma comes to make it happen.  Can’t wait to hear about it!