Home > Healthy Living >Are Wearable Fitness Trackers Helping Us to Be Healthier?
Pin It

Are Wearable Fitness Trackers Helping Us to Be Healthier? 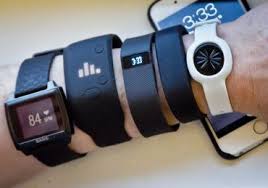 Last year I got a Fitbit, more for tracking what I was doing than for encouraging me to do more exercise.  I’ve always been good about doing floor exercises in the morning and getting out for a walk as often as possible (which reminds me, I need to go for a walk when I get done posting this!).  But just how many steps was I doing?  With the big push for everyone to walk at least 10,000 steps a day, I wondered how good I was in reaching that goal –  thus the reason for getting the Fitbit.

Sitting Is the New Smoking

Because I do a lot of computer work, I knew I was sitting quite a lot.  And if you haven’t heard yet, “sitting is the new smoking”.  Sitting can be just as devastating to your health as smoking.  That’s pretty obvious when you realize how much blood pools in your feet while sitting, making your body work harder to get the blood back up to the heart.  So I got a standing desk where some of the time I’m sitting and some of the time standing.

Of course, that didn’t take care of my reaching that 10,000-steps-a-day goal.  When you get a wearable fitness tracker, it does give you a clearer picture of just how much activity you get during the day.  When I saw the article in Time Magazine’s October 21, 2016 issue, “Why Fitness Trackers Aren’t Making Us Healthier”, I had to read it. They were reporting on a recent study that had appeared in the Journal of the American Medical Association, where researchers wanted to determine whether fitness trackers helped overweight people lose weight.  Sadly, the result of the study showed that having a wearable fitness tracker didn’t motivate people to move more on a long-term basis.  They may start out with the best of intentions, but then lose that motivation.

A second study looked at wearables in a different perspective – not how many people lost weight using them, but how many people stopped using them entirely.  That study showed that out of 800 people, only 10% were still using the trackers at the end of the yearlong study.

Just a Toy That Lost Its Appeal?

Maybe these people used the tracker as I did – to find out what their level of activity was.  Now that I know my walks provide me with about 7500 steps, I no longer wear my Fitbit when I go for the same walk. And like any toy, it eventually loses its fresh-out-of-the-box pleasure.

Fitbit did try to motivate me by sending me “high-fives” in the form of electronic badges for different levels of accomplishment.  Because I live in a very hilly area, I get credit for about 23 flights of stairs on my walk.  At some point I got a “Helicopter Badge” for all the altitude I had achieved over a certain number of walks.  And I will admit that when I reach 10,000 steps and the watch vibrates, I feel really good about myself.  It makes me want to pump my arms in the air and say “Yay, I did it!”

Because I’m fairly active (even though I have to sit a lot at the computer), I don’t use the watch for inspiration.  I think certain personality types would be more encouraged and motivated by the rewards and reminders. I wouldn’t discount wearable fitness trackers, even though, so far, studies don’t prove them to make big differences.  It really depends upon who you are.

As with any process of change, motivation has to come from within.  Maybe the next study that’s done on wearable fitness trackers will measure the level of motivation at both the beginning and end of the study.  We can then determine what it takes to encourage people to stay the course.

Make It a Competition

If you do have a wearable fitness tracker, I suggest you find a friend who also uses one.  Make it somewhat of a competition.  See who is getting the 10,000 steps on a consistent basis.  Whoever does treats for lattes.  My granddaughter has a pedometer.  Whenever we’d be together, she’d compare how many steps she had taken to what I had done.  Because she’s smaller with shorter legs than me, she gets credit for more steps per mile.  At the end of our walk, she would proudly show me her results, which always were about 1 ½ times more than me.  Not fair!

But that’s okay.  She is encouraged to get plenty of activity because of it.  Since she’s only 8 years old, you can’t tell a person’s type just yet.  However, some of the preferences are already showing.  My sense is that she has Judging (J) and Introversion (I) as part of her type name and those two help in goal setting.  Maybe that’s what keeps her using her pedometer.

Live life --- YOUR way
Learn how to make the healthiest decisions (since your life is all about the decisions you make) using personality type. Eat, Exercise, and Relax intuitively according to who you are.
If you don't know your type,
take the free quiz
If you know your type, read more...

Live a healthy lifestyle
with type
(Formerly A Diet for Every Personality Type: Is Your Personality Type Making You Fat?)
Learn about all of the 16 types, the diet plans, the exercise plans, and dealing with stress, all according to personality type.
Read more

Simplify your life with type
Make your complicated life a thing of the past. This book honors WHO YOU ARE. Learn how to answer the powerful and empowering question, "Is it worth it?" and find what's essential in your life..
Read more...