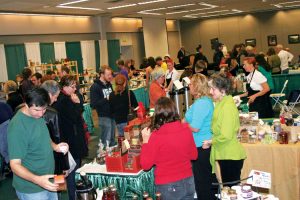 Even though Seattle may be known for having a Starbucks on almost every corner, we’re also big tea drinkers. (You have to be with our gray winters!) I love tea as much or more than coffee, so I went to the Northwest Tea Festival to learn more about tea.

I attended a number of lectures and workshops, tasting so much tea that I know I’m covered for all the good things in tea for weeks to come. Those good substances include L-theanine (an amino acid which promotes restfulness and calm), catechins and ECGC (polyphenols and antioxidants). It’s interesting that tea leaves contain more caffeine than coffee. However, because tea leaves are not ground like coffee beans, less caffeine is expressed in the steeping process. Some green teas have far less caffeine, such as Kuki Cha, because it is 80% green twigs that are chopped up for brewing and just 20% leaves.

It’s All in the Processing

When you go wine tasting, you’re told about all the various “notes” of flavor you’ll find in the wine. Well, tea isn’t that much different. In both cases, it has to do with the way the grape or tea leaf is processed.

We could probably group teas into four categories based on color: white, green, oolong, and black. Oolong, while not a color, is considered a separate category and is somewhat brownish.  The color is based very much on how much oxidation the leaf is put through. White has no oxidation, while black is almost 100% oxidized. Oolong is semi-oxidized.  Chinese teas are predominantly oolongs.  Black teas tend to be from India.

Oxidation comes from being exposed to air, but also to the amount of rolling or crushing done to the leaf allowing the enzymes to work on the leaf. Think about what happens to the herb, basil, when you pick it. If eaten immediately, it stays a bright green. But leave it out on the counter for some days. Each day the leaf will start to brown at the edges and continue to brown into the center of the leaf.  Crushing the leaf does the same thing.

It’s not just exposure to air that determines the color and the flavor. It’s also whether the tea is steamed during processing (which is true of Japanese teas and why most of their teas stay quite green, such as matcha) as opposed to being pan-fried (typical of Chinese teas). The heat affects the color and taste.

It’s How You Brew It

Many people find tea, especially green teas, bitter. I found out why. You don’t want to brew green tea in water that is hotter than 180 degrees F. In fact, some teas are so delicate they should be brewed in water between 165 to 175 degrees F. Black teas can tolerate a bit hotter water. Remember, they’ve already been oxidized to such an extent that the brewing doesn’t disturb the flavor compounds.

When I attended the lecture on “Introduction to Japanese Green Teas”, I was amazed at the many suggestions of how tea can be used in cooking. While you may be familiar with adding matcha tea (Japanese) to smoothies, have you ever thought about including it in a vinaigrette, in cocktails, foamy lattes, in baked goods, on seafood?

I tried a firewood smoked Assam tea that I could swear tasted like smoked salmon. So, it could easily be used as a rub.

In Search of the Unique

One of  the teas that unfortunately wasn’t available at the show is Shincha. It’s picked during the first harvest (a bush can be harvested every 10 days or so) on the 88th day after the Spring Equinox. It’s supposed to have an “umami sweetness” to it because it’s high in L-theanine but low in caffeine and catechins (compounds that make tea astringent and bitter).

Most teas are grown around the Equator and at high elevations. But interestingly, tea is grown in Oregon and in the Sierra Nevada mountains in California. I have yet to try them but after tasting Chinese, Japanese, Taiwanese, and Indian teas, I’d be curious as to what they taste like. Because, just as with wine, the terroir (a particular region’s climate and soil) affects the taste of the tea.

Assam, firewood smoked green – this is the one that tastes a little like smoked salmon